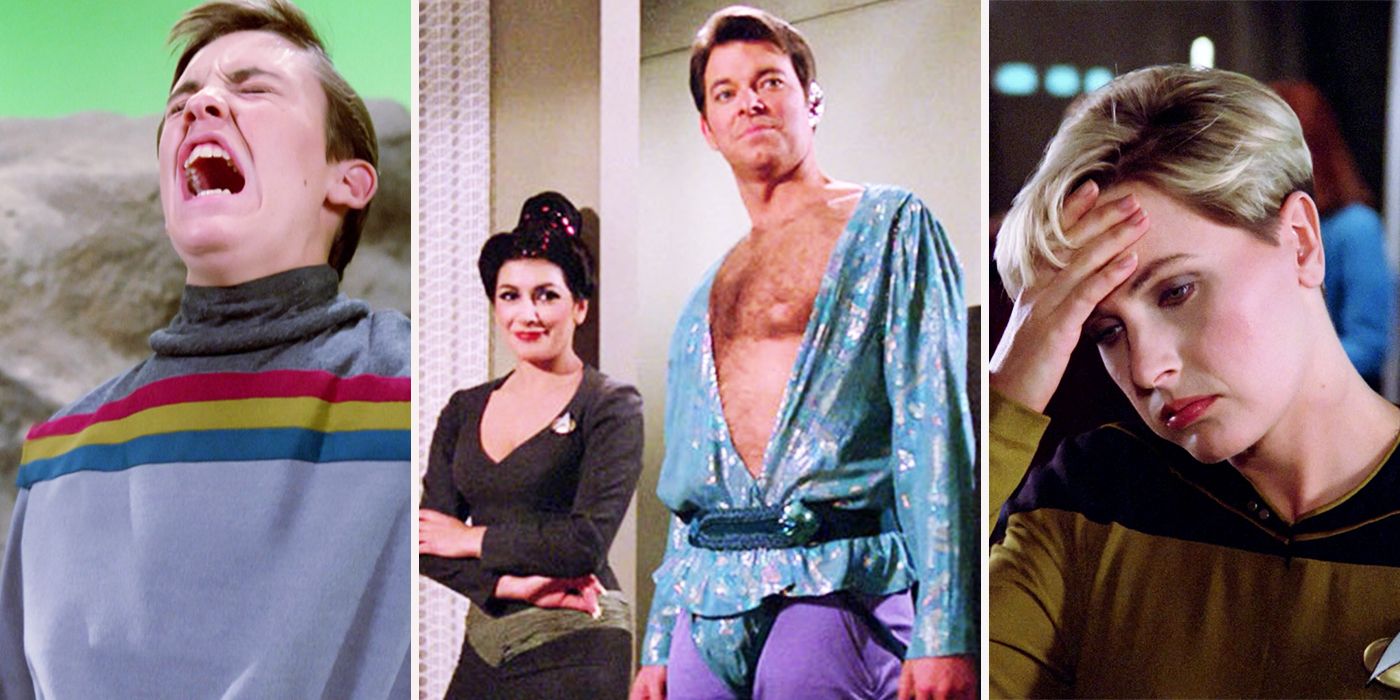 2 – The Naked Now
The crew encounters a ship where everyone died from capitalist realism. Data theoretically fucks Lieutenant Yar for days. Wesley licks pages of Thus Spoke Zarathustra and ascends. Picard stews, ostensibly the captain. Will we ever truly escape hierarchy?

–
3 – Code of Racism
Tasha Yar is kidnapped by a planet of black aliens the writers can never be allowed to forget and forced to gymnastic someone to death. Worf and Geordi bite their respective tongues. Picard quotes MLK. Riker gets stuck into the extras. Crusher calls security when alien leader breathes nearby.

The biggest racists in Trek 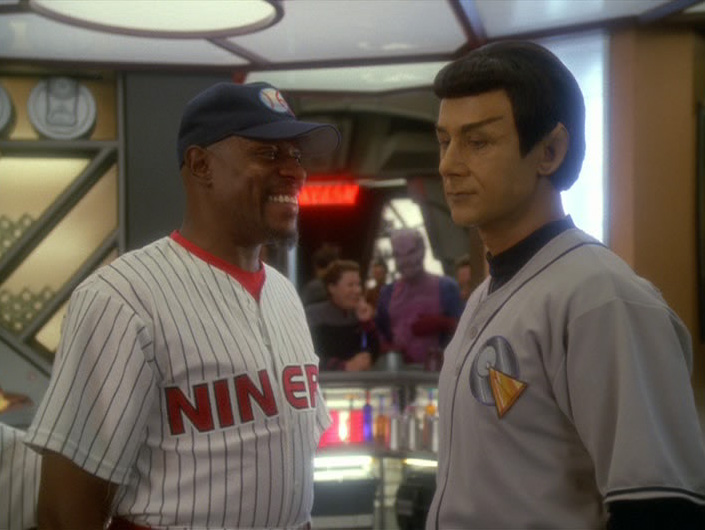 Probably the most stunning example of racism in all of Trek…and it’s a case that is so blatant that I can’t believe this guy is allowed in Starfleet, let alone be the captain of a ship…

You know…Season 7, episode 4, the Vulcan who challenges Sisko to a baseball game.

What a piece of shit.

The first scene he appears in, he’s slagging off humans, saying they are irked by Vulcans pointlessly acting like calculators, and he doesn’t really stop for the entire episode. When Sisko tells Kasidy the history between them – the drunken wrestling match at the academy – he’s basically giving all the reasons why Solok should be kicked out of Starfleet. Five papers on why emotionally handicapped species i.e. everyone except Vulcans are inferior…how did any of those even get accepted for marking? What’s next, The Bell Curve 2? Solok’s guide to exo-phrenology?

The Fall of the Klingon Empire?

The Klingon Empire wasn’t always obsessed with swinging batl’ths [sic] at alien planets, they became more militaristic as they expanded out into space. Actually, I don’t know when exactly the balance shifted, I’m just going off of the conversation between Archer and his lawyer in ‘Judgment’ [same actor who played Martok], where Archer is told that Klingons used to appreciate science and art and medicine more, but the military flashed their platform boots and altered the direction of their culture. From that point on, all the kids wanted to die before they were 25 [preferably in battle, but brawling with their mates also worked] and play suicidal drinking games in between.

‘Picard stands next to Chief O Brien in Transporter Room 1. There’s an awkward silence broken only by an intermittent humming noise somewhere within the walls. Picard tries to trace it, but it seems to be everywhere.

‘Is that normal, Chief?’

‘The noise coming from the walls…’

‘I’ve never heard it before.’

Picard nods, looking around the room. It is truly a bleak place. Nothing horrific to see, but horrific because of that. He looks back at O’Brien and tries to visualise his duty roster. Could one man really be forced into this place for 8 hours a day? What would he do in here?’ 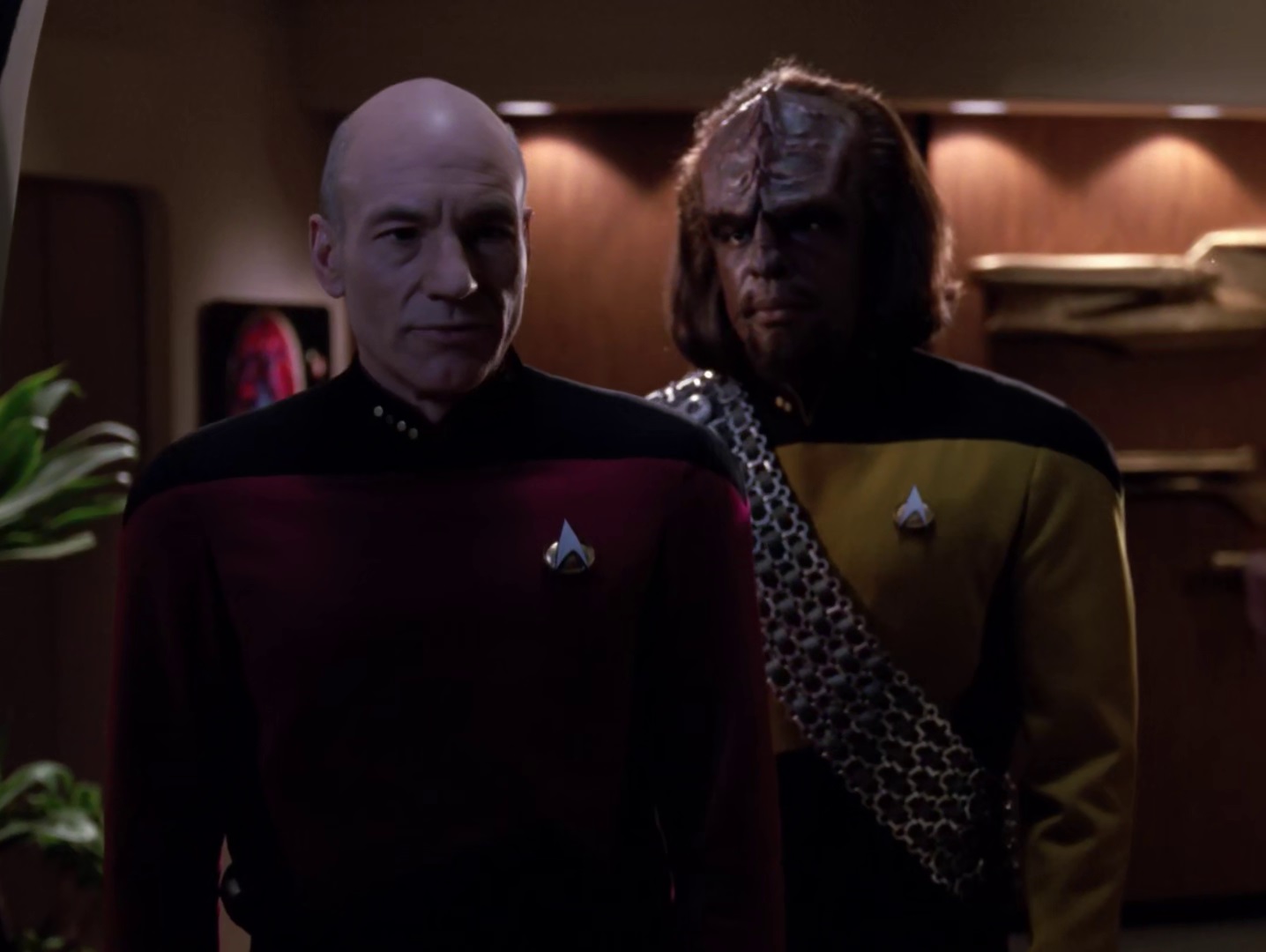 ‘Worf, what is going on here?’

‘An investigation, Sir. What do you mean?’

‘I don’t like it. It feels like the title of this episode. Soldiers in European wars were accused of crimes like cowardice, a drumhead was upended and trials were done. Judgments were swift and brutal. Any man in a drumhead trial was doomed.’

‘But, Sir…the Federation does have enemies…’

‘Simon Tarses has not been proven guilty, Worf. Nor can we assume he’s guilty based solely on the hunch of a surprisingly sexy grandma.’

‘If he’s not guilty, why did he panic when we put him in the spotlight and harassed him in front of half the crew?’

‘Tell me, Captain….have you completely recovered from your experience with the Borg?’

‘I wrestled with my brother. I’m fine.’

‘Are you certain there’s no lingering anger that won’t be tapped in the future by vacuous men with glasses and no talent?’

‘I am completely recovered.’

‘It must’ve been terrible…all those ships and lives lost…what was it? Twelve thousand people dead? One wonders how you can sleep at night.’

Picard puts his head in his hand, muttering ‘take this bitch’.

‘You know there is a phrase I learnt as a child…when the first freedom is trampled on…as long as it’s not yours, forget about it. But if it happens a lot…to people you know…and its led by a grandma in a witch-like gown…then we’re all damaged. That phrase was said by Judge Daddy as warning and wisdom, but mostly a warning, that we need to actually have real evidence before having Storage Room 4 turned into a Stasi interrogation chamber…’

Whatever happened to Mirasta Yale?

‘Can you imagine Mirasta Yale’s mindscape as she landed on an alien planet and started living there? Going from warping over to the Garth System to suddenly having access to a whole quarter of the galaxy? Talking to people with fingers?’

Quark moves away, but Odo stretches his arm and pulls him back.

‘They can re-use an old shot, same as last time.’

Odo grunts again. ‘Listen, Quark…I really don’t want to do this whole Vic thing, but it’s gotta be done so…go get me the holosuite program, okay?’

‘And clean the stage area before you hand it over…’

‘Bashir, again?’ Quark walks away shaking his head. ‘I must spend half my life cleaning that guy’s spunk off the floor…’

DUKAT: They occupy worlds, they execute dissidents, they’re more brutal than Cardassia ever was. Well, except for certain episodes of TNG. Actually, David Warner no longer works for us, he was kicked out, so…

The biggest problem I had when re-watching it was the use of Kahless as a representation of ‘evil’. In TNG and DS9, the Klingons revere Kahless and see him as a liberator from tyranny. His eating of his enemy’s heart is very much in line with Klingon customs, so that’s not really evil, and he established the ‘honour system’, which has some dubious elements i.e. the punishment of the father’s sins on seven generations of that family, but is basically a worthy code.

the main crew is sent back in time by whales and forced to set up a pseudo-federation in Brighton. They wear jeans and t-shirts and try to fit in by saying ‘rad’ and ‘fucking awesome’ a lot, but it doesn’t work so they have to adapt a little further and wear different clothes and have actual sex with men and women and smoke weed and promote socialism and feminism but not racism or sexism and shout at bigots on twitter and, eventually, they set up a radical zine info shop as a front for Federation HQ. Things are fine until suddenly they’re not, as the Klingons arrive, shoot glowing torpedoes, wipe everything out including California, and then piss off back to Q ‘onos pronounced with a ‘Kr’. The main cast then have to figure out a way to follow the rest of my series pitch without any decent technology or rational plot development or skipping any rent payments on their info shop.

Notes: it’s important, I think, to have the characters played by fresh faces. Give new blood a chance, especially minority actors/actresses who otherwise wouldn’t have a chance in Hollywood. E.g. don’t cast Denzel Washington as the female Nigerian Captain.

Diversity is important, but don’t make it a plot point unless it’s relevant. Trek has always been a utopic vision, so modern politics should stay out of it.

Don’t fall back on sexual tension.

Don’t fabricate conflict where there is none. The characters are either varied/ideologically opposed or they are not.

Don’t let all the characters believe Starfleet is best.

The Lieutenant, the Security Chief and a few redshirts land on a planet populated solely by women. There are only women because there is only one gender: female [though technically they wouldn’t be referenced as female as that implies two genders. Basically, they just look like women and have no interest in fucking Riker]. Anyway, these women see the male crew members as demons and point guns at them. One of the redshirts holds up his hands and says relax, I’m a feminist too, and gets shot in the cheek. Another redshirt holds up his hands and says relax, I’m a misogynist, and gets shot in the gut. The lieutenant thinks briefly about saying relax, I’m asexual, but the security chief tells him these women aren’t women, they’re killers, so they should all start running. They start running. The doctor, ensign captain and Cardassian, misunderstanding the situation completely, beam down to try and explain things with a friendly female face, but the women don’t like them either so hunting season resumes. Finally, they all beam away, injured, and realise that the women were from an isolated continent on the planet and they just beamed to the wrong co-ordinates. Also, it’s probably not a good idea to transfer the human concept of the sexes onto an alien culture. 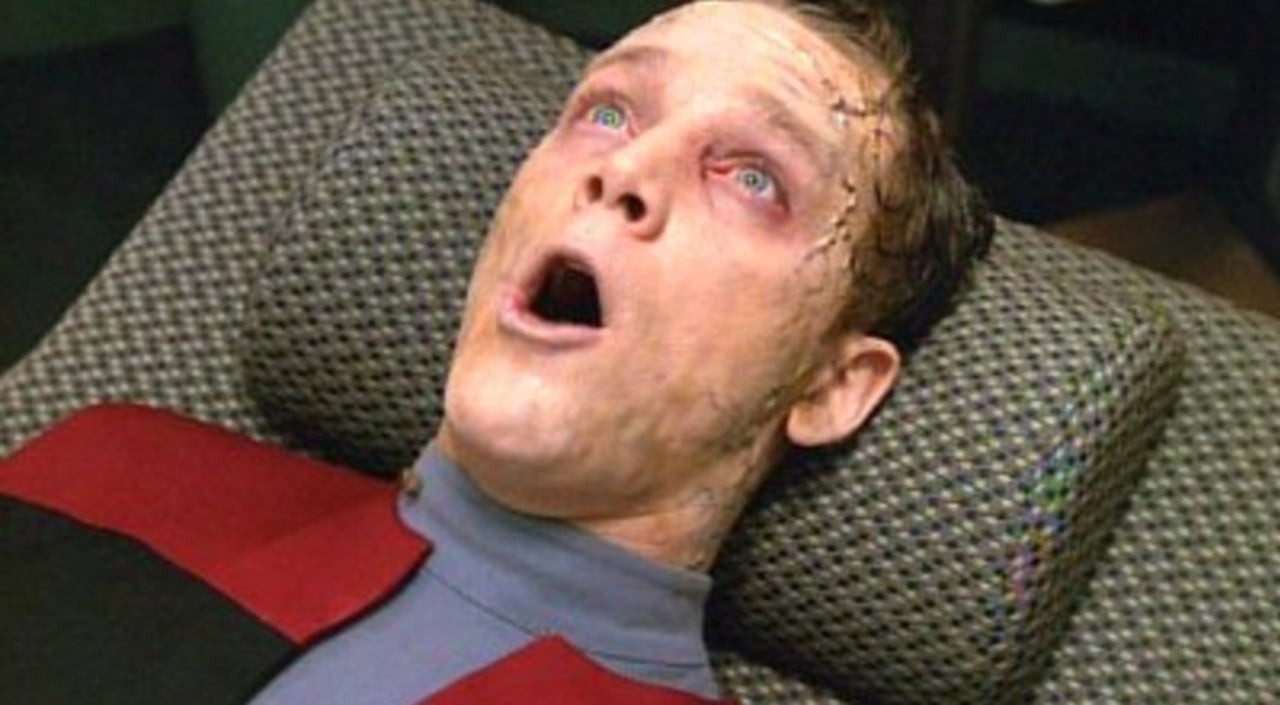 Tom disappeared from sensors and for a brief moment the whole crew thought he’d gone forever.

‘Man, there goes half my scenes…’ said Harry.

‘Don’t worry,’ said Janeway, picturing the lizard costumes in her quarters. ‘We’ll think of something for you to do.’

A hole opened in space and Tom’s shuttle returned.

Everyone looked stunned. Tuvok put a tractor beam on the shuttle and guided it back onto the ship. Chakotay stood up, clapped his hands, excused himself from the rest of the episode and headed for the strip bar across the street. If he was lucky, Chanice would be there. If he was super lucky, she might even sit on his face.