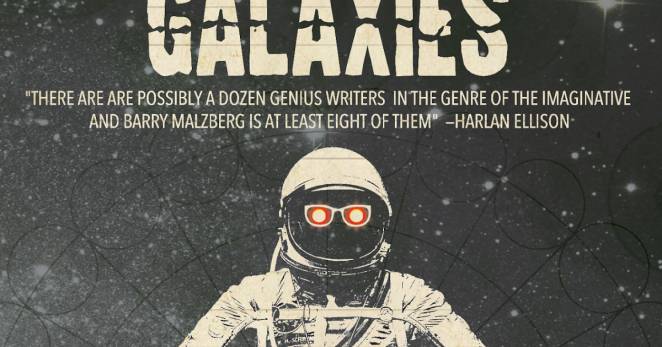 Plot: Malzberg can’t be bothered writing a novel so writes the notes for one

Subplot: Malzberg can’t stand whichever sci-fi writers he’s criticizing [Heinlein?], but sees them at conventions sometimes so doesn’t want to use their names

Sub-subplot: A ship falls into a black ‘galaxy’, where narrative descriptions are endless

Basically, the novel is a series of short chapters that function as notes on a future novel as well as Malzberg’s feelings on the state of 70’s sci-fi. Straight away this brings up two problems. 70’s sci-fi is era specific and, although some of the points remain valid [e.g. writing filler to bump up the word count, hard sci-fi writers hiding their lack of writing ability behind hard science], the era itself is long gone.

The second problem: if you’re going to write notes for a novel, you have to a] make sure the concept of that novel is interesting and complex, and b] keep your novel length down. Even at 180 odd pages, Galaxies is exhausting.

In fact, I haven’t finished the book yet.

Don’t know if I will either.

I’m on page 68, I think, and Malzberg is currently writing out potential dialogue between Lena, the main character, and another character who isn’t on the ship, it’s a flashback, a potential flashback, and I don’t really know either of these characters, I don’t care about them, and if this is the case then you better at least make the dialogue interesting.