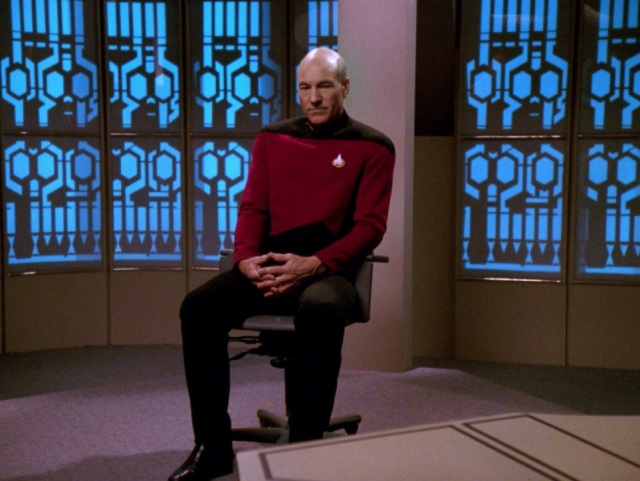 To avoid scrolling down the main page, you can read part 1 and part 2 here…

At 08:57 Picard walks into Interrogation Room 1 and stops, startled.

For the first time in his life as Captain, the crew are early to something, and not just something. His trial. Do they hate him?

He sits down and nods at Admiral Henry. No response back. It looks like he needs a dump. This is a good sign, thinks Picard. If I can make him get up and leave, the trial’s over.

Satie is glaring at him.

The betazoid is holding another pad.

Worf is sitting on the other side, in the advocate’s chair. Picard gets up and runs over, asking him quickly, ‘are you representing me?’

Picard sits down in the spotlight and shifts his body into what he read was the innocence pose. ‘Before we begin the lunacy, I’d like to give a speech.’

‘Under Federation law 24591-34 it is my right to speak before any trial or interrogation and, as far as I’m aware, we’re still operating under that law.’

Picard clears his throat. ‘Stop this Admiral. I implore you.’

‘There was more, but I’ve forgotten…’ END_OF_DOCUMENT_TOKEN_TO_BE_REPLACED

Worf folds his arms. ‘This is still pointless. All we have is vague supposition and guesswork.’ END_OF_DOCUMENT_TOKEN_TO_BE_REPLACED

No planets or moons or nebulae within visible range.

We zoom in closer, picking out a speck of dirty white dust drifting through the void, at the mercy of whichever unimaginably smug higher beings happen to be lurking nearby.

The darkness lightens a shade or two, and we’re inside the vessel.

A Klingon that isn’t Worf sits in the sharp spotlight of a room with no decoration. Opposite him, sitting behind the only desk, are two people: a lanky, part-time sleaze with a black beard and a female betazoid in a lilac leotard.

Behind them, shadows creep along the edges of the walls, possibly cameramen, possibly ghosts.

‘I don’t know anything about that,’ says the Klingon, keeping his ridges hyphen-straight.

‘Is that so?’ asks Riker. ‘Then maybe you can explain why you were in Engineering last night…’

‘There’s no point denying it, J’dann, you were seen.’

Riker glances at Troi then back at the Klingon. ‘We didn’t say it was a ‘he’.’

‘We did not say you were seen by a man,’ repeats Troi.

‘Aghh, most of the crew here are men…lobotomised, puny men who never speak, but men nonetheless.’

‘Okay. How about this?’ says Riker. ‘You were overheard in Ten Forward saying, and I quote, ‘Klingon blood has turned to milk…the Romulans are strong…that warp core door looks sabotageable…grrrr, why is everyone in here human?’ END_OF_DOCUMENT_TOKEN_TO_BE_REPLACED