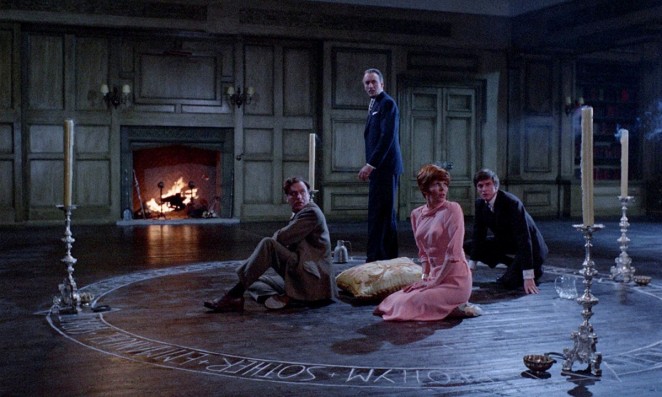 Plot: Christopher Lee and a big, dumb lump visit the nephew of a dead friend, who they vowed to protect, and discover he’s hanging out with a surprisingly diverse group of Devil worshippers. The leader of this group, Charles Gray, has hypnotic eyeballs and is planning on inducting the nephew, Simon, and a sexy Italian actress into the group. Can Christopher Lee and the lump save them in time?

Subplot: A rival group of Satanists try to call Christopher Lee and tell him he’s seriously misrepresenting their beliefs, but he’s never home.

Sub-subplot: A lonely goat makes its first human friend and accepts his invitation to a forest party.

I’ve always got time for horror with satanism in it…The Masque of the Red Death, Blood on Satan’s Claw, Witchfinder General…though it’s rare to see any that doesn’t equate it with evil or malice. Sadly, this one does, even if it is generally very watchable and well-made.

Has there ever been a group of Satanists that have sacrificed someone or done terrible things? Probably. I think a few serial killers claimed to be acting under the command of Satan, or following his ways, but that’s not a reflection on the whole movement.

Aleister Crowley is the more iconic representative, and he was basically an oddball rich kid who took a lot of drugs, put on robes, did magick, performed ceremonies, studied other religions, took more drugs, adored Scotland. Far as I know, he didn’t sacrifice anyone. [Not sure about his reputation among the goat community]

But it’s a horror film, so a group of Satanists just sitting around naked, doing spells wouldn’t be very entertaining. Better to hire Charles Gray and make him calmly psychotic.

Is he a menacing villain?

He’s distinctive, and menacing at times, especially because of his voice and his eyeballs. Would’ve been more intimidating if he hadn’t been punched by the big-dumb lump in the goat sacrifice scene…that was a mistake by the director. Made him lose his untouchable aura.

Is he on par with Prince Prospero from Masque of the Red Death?

Not really. He’s not in the film enough and, with the exception of one scene, he doesn’t actually do that much. Also, with Prospero, we follow his attempt to convert Francesca to Satanism and learn some of the history of his family, but with Gray, we don’t discover anything about his background.

In one of the best moments of the film, Charles Gray visits the mansion where Simon and the Italian actress are hiding out, and, despite being warned by Christopher Lee that this guy is evil, the owner invites him in and sits in a room alone with him.

Then he starts talking about the truth of satanism and ‘the power of mind over mind, will over will’ and probably due to the lure of his limpid blue eyes, she starts touching herself all over. I’m not sure if she’s attempting to show something invasive or general discomfort at the effect he’s having on her, but it works. The alternative choice would’ve been for the actress to have become more and more still, a safe choice, but done the way it is in the film, a counter-intuitive choice, makes it more memorable and real.

It’s normal to have a sceptical character in horror films, but Christopher Lee’s friend knows literally nothing and is only saved from an early death by the scriptwriter making Charles Gray momentarily oblivious. How did he not know the guy was watching them kill the goat? Why didn’t he try to hypnotise him at any point? It would’ve taken about four seconds…

Not really a plot hole, just a character who was a bit dull, defined completely by no-nonsense heroics and his sudden love for the Italian Actress. Maybe he saw the promo shots for the film, Charles Gray groping her breast as he’s about to sacrifice her?

I’ve only watched the film once, but I don’t remember that scene appearing in the film…maybe it was in the director’s cut? And if so, did he tell Gray to grope her or was it improvised? Seems a bit dodgy either way.

Is there any other perverted stuff he does?

Like I said, we don’t see much of the villain in the film, so there’s no real sexual element to him, which there probably should be in this kind of cult. In Witchfinder General, Matthew Hopkins sleeps with possible witches in every village, while it’s implied in Masque of the Red Death that Prince Prospero has a lot of sex…in this one, Gray seems more aloof, as if the hypnotism is rape enough for him.

Maybe that makes him work better as a villain?

The biggest let down of this well-paced and entertaining film was the ridiculous ending. Christopher Lee and co rush into the Satanist’s secret basement, trying and failing to rescue a little girl from being sacrificed. Luckily, the Italian actress possesses another woman, saves the girl, sends Gray to Hell, and collapses the whole set to reveal…a giant crucifix hanging on the wall.

Turns out the secret Satanist basement was a renovated church, and God has returned to deliver justice.

Christopher Lee hammers home the point in the epilogue by saying they should all thank God for traumatising a little girl and terrorising the rest of them, for it was He who saved them all.

Actually, I don’t know if the little girl remembered any of the events…it’s said that the rest of them remember what happened, but the girl is not shown…perhaps she’s okay, it’s possible…but still…it’s a disappointing ending for several reasons.

One, why does god always put people through shit like this? To remind people how great He is? Is that why goats have to die?

Two, either the church was turned into a Satanist temple by Charles Gray or God shat on religious freedom [and property rights, though as these are all rich people and most of their property comes from historical exploitation and theft I don’t care so much] and forced his own beliefs onto others.

Three, it could be a level of subtle irony I’m not detecting, but it feels like the point of the ending is to overtly celebrate Christianity and God’s defeat of wicked brainwashing by embracing a more pervasive, entrenched form of brainwashing.

Obviously, I’m not a religious person, but anything this overt is never good…similar to nationalism in Hollywood movies, or in any movie industry, really…it feels cheap, even more so when you look at how they portray Satanism. Even Christians would cringe at this.

The crucifix symbolism at the end is just laughable…and seems to say a very conflicted message. God saved you, God put you in danger to begin with. God brought down the Satanic Temple, God allowed a Satanic Temple to be constructed [over a church] in the first place. You have Free Will, apart from when you don’t.

If this is what’s being sold, of course most rational people would avoid both, Satanism and God.

It would’ve been a lot more interesting if there’d been irony in the battle, or some variety in the Satanists…maybe Christopher Lee’s character consulting with another occultist, telling him Charles Gray was expelled from other sects…or Lee himself could’ve been a Satanist, showing the opposite side of the belief system…not just the black and white propaganda it ended up as.

Even the Christian characters could have had doubts.

One of them at the very least wondering out loud why God did things that way. Or someone bringing up World War One…

Or maybe a Christian character who is quite curious about the concept of Satanism, and sees it as a failing in the religion itself, the fact that people might drift towards the bad guy in their book…

I felt sorry for the goat. You don’t see it explicitly being killed so I’m hoping it was okay, and paid full salary for its nights work.

Charles Gray does sophisticated malice well. So does Christopher Lee in other films. Did they ever do any other films together?

It would’ve been good if they’d done another film in this series, one where the plot showed different aspects of it, and delved into more of the history, like the different demons, the Munich Manual, other grimnoires, Crowley etc. As the film was set in 1920’s, I’m surprised there was no mention of Crowley as he was contemporaneous to that era. Perhaps he hadn’t broken into the mainstream yet? I’m not really sure. Do most people know him now? I would say he’s semi-mainstream…if you did any kind of search for Satanism, his name would pop up pretty fast.

Maybe Charles Gray’s character was based on him?