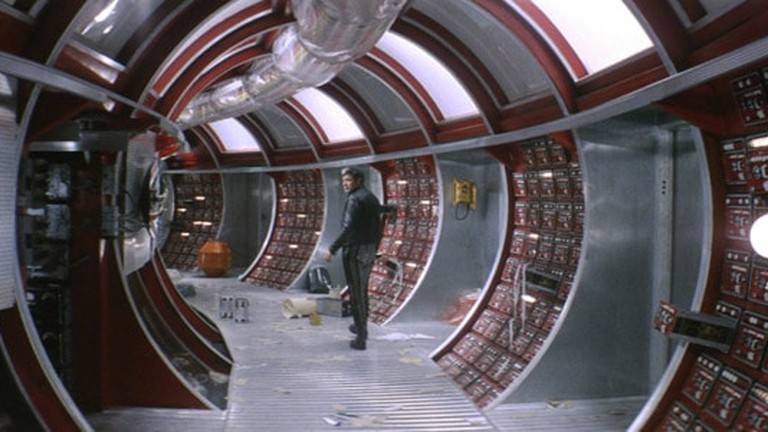 Gena breathed smoke on his jacket. ‘Try me.’

‘Well…first of all, you should know that…science as you know it…the common perception of science is false.’

‘For example: Gravity. It’s not what you think. Common science has you believe that gravity is proportional to mass. This is wrong. Mass has nothing to do with anything. Take Jupiter: They say if you get close enough, the gravity will crush you. That’s just wrong. It’s theoretical and wrong. The truth is, Jupiter has a half gaseous, half solid core which is the size of a pebble and…therefore has almost zero gravitational pull.’

‘No, I get it, but it doesn’t make sense. If Jupiter’s no bigger than a pebble, and has zero gravitational pull, that means…doesn’t it mean gravity is still connected to mass?’

‘Science is a difficult thing. It’s probably best if you just trust us and hand over your husband’s corpse. We’ll do the rest.’

Gena smoked the remains of her cigarette and stared at the mountains in the distance. This version of…science…sounded like a load of shit, but what choice did she have? Life was Beckett without John.

She stubbed out the cigarette on the desert floor.

‘When can you start?’

With Gena’s consent, the scientists went to the cemetery in New York and dug up the body of John Cassavetes. They took him back to their little piece of desert somewhere near Almeria, Southern Spain and made the requisite measurements. When they were done, they put him in the rocket and shot him into space. Five scientists made the journey with him, two driving the rocket, the other three tending to the patient.

First, they had to condition the body.

Common science tells us a human body cannot survive either the vacuum of Space or the atmosphere of Jupiter.

The scientists drip fed small quantities of Jupiter’s atmosphere into the body of John Cassavetes. Nine parts Hydrogen, one part helium, 0.001 parts miscellaneous. At first there was resistance but, after two days on the bottle, things were a little more settled.

For the rest of the week, as they flew towards Jupiter, they continued their treatment, gradually increasing the dosage. At the same time, the draining was done. All the water left in the corpse was removed, replaced by ammonia, and the skin was coated in a proto-neutronic compound to prevent further decay. In addition to this, a super strong flame retardant spray was applied to resist the 1,000K temperatures the director of ‘Faces’ was about to endure.

‘What if it’s higher than 1,000K?’ asked the youngest scientist.

By the time they reached Jupiter, John Cassavetes was ready.

‘Okay, guys,’ said the lead scientist to the others. ‘Same procedure as before, only this time make sure the knot is tighter.’ He turned to the window and looked out at the black. ‘We can’t afford another Mishima.’

They nodded, strapped a cord to Cassavetes’ ankles, made it tight, and pushed him out the airlock. They let him drift away from the rocket for a few hours then turned the ignition and started circling the giant planet [or the pebble planet].

The cord was reeled out further until the corpse dipped into the thermosphere. Luckily, the temperature was exactly 999K, so the body didn’t incinerate.

After four months and twenty seven orbits, they pulled John Cassavetes back into the rocket and set course for Earth.

One week later, Gena Rowlands stood in front of a stone slab looking down at the corpse of her husband. He looked healthier, that was undeniable, but he was still dead.

‘I don’t understand,’ she said to the lead scientist standing next to her. ‘He’s not moving.’

‘But you said…you told me he…’

‘…no, what we’ve done is…the body is the same but the mind of your husband is alive. Everything that is important has been brought back.’

‘Where did it…where’s his mind now?’

‘The past, the future…a different universe. There’s really no way to know for sure. What we do know is…there has been a transferral of your husband’s data…his mind…and it has gone somewhere else, to live again. Isn’t that beautiful?’

‘You stupid bastard.’ She reached for a cigarette then realised she’d smoked them all on the taxi ride there. ‘You haven’t done a damn thing…’

‘Stupid? Excuse me, Mrs Rowlands, but I don’t think you…’

‘You’ve fiddled with a corpse.’

‘Fuck you,’ she said, no volume spike. ‘Fuck you, fuck science, fuck Spain.’

Gena said ‘Fuck Spain’ a few more times then picked up a tray, threw it at the scientist, grabbed her husband by his ankles and dragged him out of the room.

‘Really, Mrs Rowlands, there’s no need for this,’ the lead scientist said, following her out into the corridor. ‘Your husband is alive. John Cassavetes is out there somewhere, sometime, present, future, far future…living, breathing…thinking. We just don’t know where…or when.’

‘Fuck you’ trailed down the corridor and then she was gone.

And so was John.