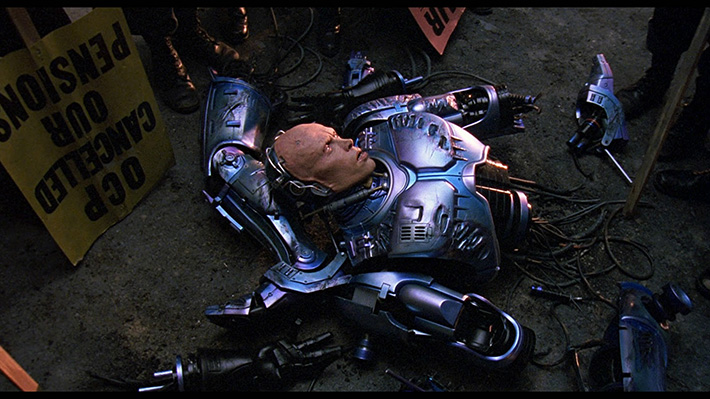 “If you live long enough…eventually you’ll [get to] travel in time.”

I don’t know [why the Romulans like grey]. Ask Levar.”

Robocop had survived seven sequels, two remakes, one re-imagining and a spin off with the black cop behind the front desk called ‘front desk cop’ which had been cancelled after thirteen episodes, four of which were quite innovative and took place solely behind the front desk, viewing the action through the eyes of front desk cop, which was a brave move at the time as in two of these episodes absolutely nothing happened, no action, no crime, no whores sitting in reception chewing gum [that never really happens anyway, the cops rarely arrest prostitutes, it’s a myth, a myth that was put to death by these four episodes and later resurrected in the re-imagining]…

…so Robocop made it to the year 2092, which was the year a scientist came up with the idea for  time travel, an idea based on the concept of picking up strips of Space and spinning them around until a hole appeared that you could jump through and go back in time, an idea that was called ‘dumbo’ by other scientists and friends of scientists and people who’d heard the word ‘science’ once until one country was brave enough to put cash into building a spaceship to send up into Space and pick up the first strip, and it didn’t matter if the spaceship couldn’t go very far because any part of Space would do, and the actual picking up of something that wasn’t really physical was done by introducing a new material that could re-structure the atomic structure of a part of Space and make it solid, and then it could be picked up and spun around until it was weakened enough for a hole to appear, and that’s what they did, that’s what Slovenia did, and the only person dumb enough to volunteer to go up there was the only person who had already died and done sequels and remakes and didn’t care if the same shit happened again and again and…

…it had been over a century since Robocop had stuck a spike in the neck of Clarence Boddicker, but he’d often thought of it, the casual violence, the impulse not to try and talk to the guy but kill him dead, the same impulse that had ruled him and his actions for the last hundred odd years, the conservatism, the intolerance of not wanting to give any of these scumheads a second chance, and now that he was spinning into the time-fucking Space hole, Robocop knew what year he wanted to go back to, the year of the death of Boddicker, and not just the factory site where he’d died, but further back, when there’d been a chance to do things differently, and as soon as he thought it, he was there, standing in the same place, the same warehouse, holding a smirking Bodicker by the collar and getting ready to throw him through another sheet of glass…

The rehabilitation of Clarence Boddicker

Step One: Robocop lowered Boddicker down gently onto one of the boxes and waited for back up. Boddicker called him an asshole a few times then went quiet.

Step Two: Robocop helped the paramedics load Boddicker into the ambulance and sat with him on the way to the hospital. He asked Boddicker about his family, his life, why he’d become such a bad dude. Boddicker spun a few fake tales then called Robocop an asshole again and asked for his lawyer.

Step Three: Robocop helped the nurses to treat Boddicker’s cuts. He asked Boddicker if he could get him anything or if there was anyone he should contact to let them know what had happened.

‘I don’t think you should be hanging around with Dick Jones anymore. He’s not a good guy.’

Step Four: Robocop drove Boddicker back to his apartment and said he’d be watching him, making sure he stayed out of trouble.

Step Five: Robocop went to OCP to try to shut down Ed-209 before it could attack him, but his engineering work was a bit sloppy and Ed-209 came to life and the two of them went through the same routine again. Well, for Ed-209 it was the first time and not a routine, but for Robocop it was deeply depressing.

Step Six: Boddicker turned up at the factory site with his mates and tried to fight Robocop. Everything played out the same, only this time Robocop stuck the spike in Boddicker’s leg instead of his neck.

Step Seven: Robocop bought some flowers and went to see Boddicker in hospital.

‘I’ve brought you some flowers, Clarence.’

‘No…I’m just going somewhere else. I won’t abandon you.’

‘Leave! Get the fuck outta here!’

Step Eight: Robocop gave Boddicker some space when he was released from hospital. Informants told him that Boddicker was mad as hell and looking for revenge, but Robocop put it out of his mind. No matter what the cost, he had to turn this guy around.

Step Nine: Robocop helped Boddicker from a distance. He put extra cash in his bank account, got a headhunter to offer him work, beat up other criminals looking to pull Boddicker back into the shit. It seemed to be working.

Step Ten: Boddicker went to eleven job interviews and fucked them all up one by one. He was a charming guy, but he wouldn’t accept the salaries they were offering him.

‘I had it all. Women, drugs, power…I had people who feared me, people who’d cross the road just so they wouldn’t have to look me in the fucking eye. Not bad for a guy with glasses, huh?’

‘So…this is the salary we’re offering. No women or drugs, but perhaps a management position somewhere down the line, if you work hard and…’

Step Eleven: Robocop dressed up as a businessman and offered Boddicker the position of Chief Content Engineer at a made up company. It didn’t work. Boddicker spotted some metal under the make-up and walked out, shouting back ‘you’re the fucker behind every shit thing in my shit fucking life and I’ll cut you for it, metal man, I’ll cut you into tiny metal pieces.’

Step Twelve: Robocop bribed a girl from Russia into going on a date with Boddicker. He taught her the history of her date and all the things that would attract him. She played her role well, and slowly, slowly, surely Boddicker fell in love.

Step Thirteen: The girl’s visa ran out and she was deported. Robocop tried to threaten immigration into looking the other way, but they wouldn’t. In fact, they reported him for coercion.

Step Fourteen: Boddicker bought a gun and made plans to rob his first security truck in eight years. Love had been cruel to him, so now he’d be cruel back.

Step Fifteen: Robocop went to Boddicker’s apartment and forced his way in. He told Clarence that enough was enough and if he didn’t reform soon, he’d be put away for the rest of his days.

‘Because you want me to, bud, and I don’t wanna do anything that makes you feel even a little bit better about this shithole swamp we’re stuck in.’

Step Sixteen: Robocop restructured his belief system. Most people were capable of reforming, but not Clarence Boddicker. Killing him isn’t so bad. One death doesn’t make a habit.

Step Seventeen: Robocop picked up Clarence Boddicker and threw him out of his apartment window. The only thing that didn’t break, surprisingly, was his glasses.

Step Eighteen: For the next week, Robocop was as nice as pie. He opened doors for people and gave change to the homeless. He even helped to publicise front desk cop’s new TV show.

Step Nineteen: Robocop met another implacable psychopath at a petrol station. The guy wouldn’t stop shooting at him so Robocop sighed and then shot him in the cheek. Somewhere in Malibu, Guillermo Del Toro raised a glass.

Step Twenty: Robocop wrote on a notepad in the police station. ‘Two deaths do not make a habit.’

Step Twenty-one: In 2092, Robocop was approached by the scientist who discovered Space ripping time travel and asked to be the first man through. Robocop stroked his chin and said ‘no, I’m good.’