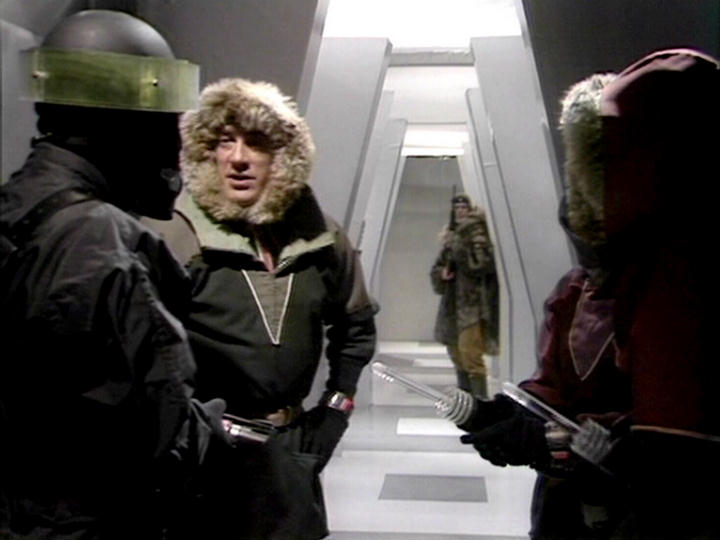 Travis nods. ‘Blake…I despise him, I will kill him, I will talk about him in my sleep…I will have him pushed into new galaxies and kill him there too…call his house at weird hours, label him a peasant, threaten his perm…’ END_OF_DOCUMENT_TOKEN_TO_BE_REPLACED 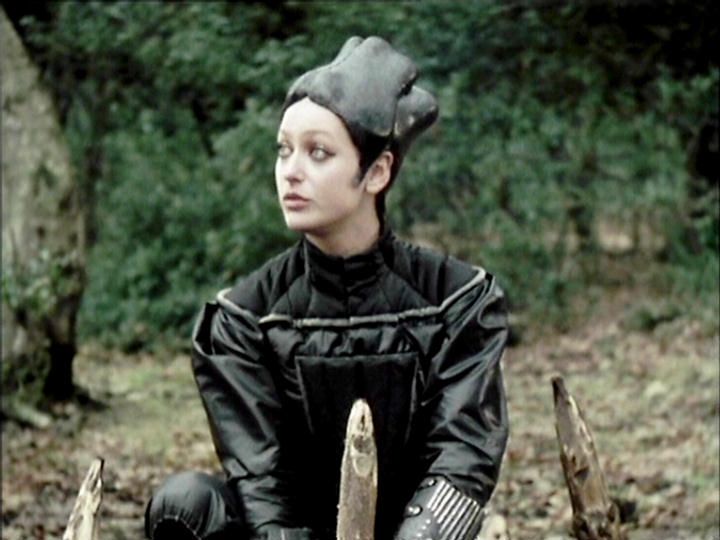 EXT. but really INT. – a stormy, misty, polystyreney set magically manages to stay upright long enough for a hag and posh model to spout cryptic nonsense about the balance of power on their desolate planet.

The hag moves around a lot to keep warm, asking the posh model if it’s really time or if she should go back to her Roy Chubby Brown vid.

‘Everything is in place.’ The posh model points to the stars. ‘Those three ships with huge flashlights are laying a trap for he who cannot die.’

‘Then we’re bringing them down here?’

The hag rubs her hand up and down her wooden staff, staring at the posh model’s white gown.

‘They gave me a cloak and I’m ethereal too.’

‘You are the dark power, destruction.’

‘Wow…you’re really in character…is that the only way to get through this?’

The posh model coughs, bending down to the hag. ‘I’m wearing a thin gown in the middle of winter…cos Terry said it would look ethereal.’

‘Luv, you can see your nipples from Albania.’ END_OF_DOCUMENT_TOKEN_TO_BE_REPLACED 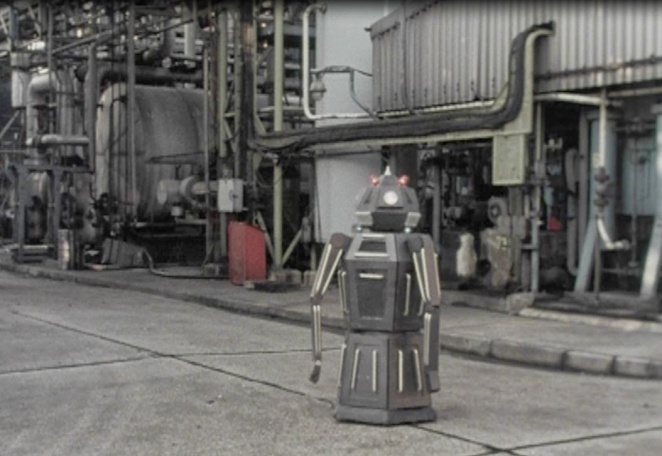 Blake wanders around dirt patches and random industrial edifices like a kid [me] waiting for his dad to stop fucking around with that fibreglass mould inside the hangar.

A robot on wheels appears and fails to spot Blake due to only using its face to do the checking.

Blake comes out of hiding and tells Vila to teleport down and open the gate.

Vila contractually complains a bit, grabs his toolkit and stands on the pad.

‘Am I not important?’

‘And tell him we understand why he ignored us this time, and why he went down to the planet while we stayed here and why he insisted on meeting in the sauna last night and why he had to sit between Callie and I and why Avon was on his lap and…’

‘I was stretching, actually,’ corrects Avon. ‘Near his lap, not on.’

‘Can’t you tell him all this yourself, over the comm?’ asks Vila.

‘He won’t listen to me,’ answers Jenna with a frown.

Vila says ‘ah’ and looks at Avon, who nods and beams him down.

‘Do you think it worked?’

‘Your pursuit of more screen time? As long as they don’t introduce a sociopathic, power-hungry yet slinky female villain twenty minutes into this ep, sure. It worked tremendously.’

Jenna sighs. ‘I should’ve stayed on Earth and become a lobbyist.’ END_OF_DOCUMENT_TOKEN_TO_BE_REPLACED

The whole crew takes a deep breath, even Zen, and…

Callie fiddles around with a panel.

We zoom in and see that she’s placed a bomb in there.

Callie turns around and does a sneaky face.

A cameraman [or woman] dollies up to Vila, who asks if his outfit looks futuristic.

Callie gets a close up of her face and is told to act like she doesn’t know what a Vila is. She does it. Then knocks Vila out.

Jenna tells Blake to wake up and get to the Bridge. Or he’s already on the bridge, sleeping on the couch, I can’t remember, I only watched this once and didn’t have the willpower to go back and check.

‘We’re getting a signal from a nearby star system.’

INT: THE LIBERATOR BRIDGE, TIME UNKNOWN, MAYBE A FEW DAYS AFTER BRIAN BLESSED GOT BLOWN UP OVER CYGNUS ALPHA

Blake stands two feet away from Jenna, who is in front of the pilot’s console, running through the instructions to make the ship move.

Jenna looks puzzled for a moment, checks the script then nudges Blake in the side. They whisper for a bit, Blake looks reluctant, then they finally swap positions.

Jenna shakes her head and points at a different button. Blake smiles and presses it.

Blake claps his hands together and looks at Avon, Gan and Villa, making sure they’re not gurning. ‘Okay, now we know how to move the ship, let’s check if there’s anyone following us. Zen, are there any Federation ships in the vicinity?’ END_OF_DOCUMENT_TOKEN_TO_BE_REPLACED 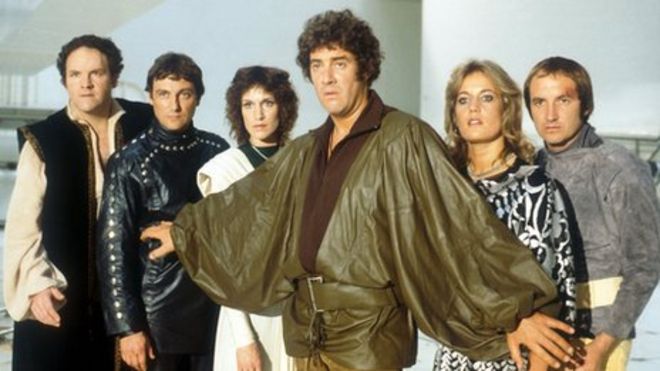 Not until free men can think and ski

Crawl inside the walls

END_OF_DOCUMENT_TOKEN_TO_BE_REPLACED

Trying to phase out the sleaze, but it keeps creeping back…

If you can’t be bothered checking the categories at the side, here’s where the other Blake’s 7 reduxes are:

‘That shooting star up there?’

The man frowns, wondering if any of the new prisoners are either a] bigger than him or b] sexier than him.

‘The new believers…’ corrects the woman.

‘They are believers, not prisoners.’

‘Right. What is it we believe again?’

The man rubs his nose bridge. ‘He did the Iago monologue last night.’

The woman swishes her hand leftwards and the man trots off in that direction. After staring up at the sky for a bit, the woman walks the opposite way, off the quarry set and straight into a barrage of ‘show us your crystal balls, luv.’

She shakes it off, reminding herself over and over that it’s not just here, it’s everywhere.

The young lieutenant walks through a door with Flight Control Deck stencilled on it and tells the captain that the prisoners are all high as fuck and looking forward to Cygnus Alpha. END_OF_DOCUMENT_TOKEN_TO_BE_REPLACED

It’s been a while, but you can find the first episode redux [The Way Back] here

INT: SPACESHIP/BBC STOREROOM, ONE CIRCULAR WINDOW TO SHOW BLACKNESS OF SPACE, LOTS OF CONVICTS SITTING ON CLASSROOM CHAIRS, NO TATTOOS

Blake sits with his back to the window, restrained by a piece of ribbed plastic tubing curving round his torso.

He surveys the convicts in front of him.

‘Who wants to join my crew?’

Half of them raise their hands.

An old-ish guy tells his crew of two to say some random numbers and set course for Cygnus Alpha. They repeat the numbers for a few seconds then the youngest crew member, we’ll give him the rank of lieutenant, goes back to the book he was studying. END_OF_DOCUMENT_TOKEN_TO_BE_REPLACED

Reluctant Perm on head follows man and woman who may or not be main characters outside of a dome in that forest near Southampton .

‘Will there be plot?’

Reluctant perm increases reluctance by a few per cent because they’re outside and the Federation – without Riker or Sisko or Picard, only those corrupt admirals who cropped up every now and then – do not tolerate perms wandering outside the dome, especially welsh perms playing fanatics based on Mexican revolutionaries that most people don’t know about.

Emilio Zapata, a Northern Mexican, shot rich people and never dropped poor people in the shit just so he could go and poke drunk college students in Cancun.

Cancun Census 1917: Population: a lot, many rich, but zero zapatas

‘I don’t remember that.’

‘I wish I had longer to explain,’ said the old-ish man who had hoped this role would stretch out for more than a single episode [stay longer in the dome, Terry, copy Reds, remember Reds? Yeah, they talked a lot, about socialism, revolution, people liked it, copy that, no, you’re sticking with the perm, fuck you then], ‘but we’re about to be massacred.’ END_OF_DOCUMENT_TOKEN_TO_BE_REPLACED